Visiting tourist areas, enjoying pancakes, staying at a homestay close to nature… are experiences in Sap Mountain that visitors should not miss.

Nui Sap town belongs to Thoai Son district, An Giang province, about 24 km northeast of Long Xuyen city center. This place is not really famous with tourists, but is a peaceful destination with many distinct historical – cultural values; Mountain scenery, charming rivers and countless typical dishes…

Ong Thoai lake tourist area has 3 large lakes, the lake area is about 9 hectares wide. These are deep and wide pits due to quarrying at the foot of Sap mountain, now developed by the local government as one of the tourist attractions. In particular, the largest and most beautiful lake is called Ong Thoai lake, which is a place to commemorate the merits of discovering An Giang land and digging Thoai Ha canal of Thoai Ngoc Hau. On Ong Thoai lake, iron bridges were built connecting spans across the “oases” in the middle of the lake.

Located on the slopes of Sap mountain, right outside the tourist area of ​​Ong Thoai lake is the temple of Thoai Ngoc Hau. This is the place to keep precious artifacts such as the ancient Thoai Son stele with an article marking the construction of Thoai Ha canal in 1818. The ancient features and temple space are arranged in harmony… for you. many interesting things when discovering the history here.

At this lake, you can leisurely ride ducks, canoeing, enjoy watching the sky, the water, colorful Koi fish swimming around…

Thất Sơn, also known as Bảy Núi (“Seven Mountains”), is a series of small mountains in the Tri Tôn and Tịnh Biên districts of An Giang Province in Vietnam, very close to the Cambodian border. It is one of the most beautiful trekking destinations in Vietnam that offers sweeping views over the area and the greenery is a treat for the eyes.

The common names of the seven mountains in the Thất Sơn range are:
Cấm Mountain (Thiên Cẩm Sơn) “Heaven’s Forbidden Mountain”: Thiên Cấm Sơn (the Cấm Mountains) is the highest in the mountainous region of Thất Son at 710 meters and is the highest peak in the entire Mekong Delta region. Mount Cấm, where it has such spectacular mountainous terrain, is known as “Đà Lạt of the Mekong Delta”.

Núi Dài Năm Giếng (Ngũ Hồ Sơn): The mountain is 265 meters high and five wells are hidden at a height of about 200 meters on the eastern slope.Five wells, three odd wells and one double well, in which the mouth of each well is an irregular oval and no wider than two square meters. Nobody knows how deep they are, but they do know that the wells are full of water even in the dry season. According to legend, in the future these five wells will have five
lotus flowers along with five beasts to guard the wells. This myth attracts many pilgrims from all over the country.

Núi Cô Tô (Phụng Hoàng Sơn): Mountain 614 m high Co 5,800 km long, 3,700 m wide.In a mountainous region and due to such a special geological structure, there is an underground cave system like a large honeycomb in many places inside the mountain, very solid and strong. So these mountainous regions have many sights to offer.

Núi Tượng (Liên Hoa Sơn): At the top we have a panoramic view of the Tinh Bien neighborhood below with vast rice fields dotted with some houses, buffalo and winding canals. We appreciate the beauty and the peace and quiet of now.

Núi Két (Anh Vũ Sơn): There are more than 10 interesting places on the mountain from  foot to  top and along its slopes that tourists should not miss, such as Fairy Well and Truc Lam, Ngoc Hoang, Phat Thay, Huynh Long and the Phat Mau Temples. In the middle of the mountain is a huge rock called Mo Ket. From this position, visitors can see the mountain, which looks like a mountain in motion because the passing cloud masses  are constantly changing. The average temperature in the mountain area of ​​ is between 18 and 24 °C even at noon. Nearby is Mount Dai, which looks like a giant rock garden, and an ancient temple, both worth visiting.

Núi Nước (Thủy Đài Sơn): The mountain is usually crowded with tourists and pilgrims during the festival season from the fourth to the seventh lunar month.

If you like to eat breakfast with water food, fish noodle is one of the dishes you should try. This is a Western-style dish because of the rich flavor of the broth cooked with wormwood noodles and fresh turmeric, adding a piece of snakehead fish that is both sweet and firm.

In the afternoon, you can enjoy bread soup (bánh canh) – one of the specialties at Sap Mountain. The bowl of bread soup scores the sweetness in the broth stewed with bones, squid, and dried shrimp, mixed with the sweet and salty taste of  shrimp, and the mild spicy taste of chili peppers. If you like the sour taste, you should squeeze more lemon wedges in.

In Sap Mountain, there are two famous places selling bread soup, located near the police station, and Tam Hoai, opposite the Protestant church on Nguyen Van Troi street. 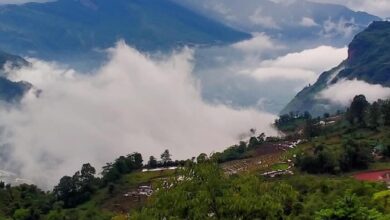